Your mission, should you choose to accept it, is to escape this complex to (presumably) freedom. You won't have much for weapons. Your fists, your trusty pistol and a chainsaw. You will have to battle to escape but you CAN do it.

send me an Email

I began the journey of building this map more than 2 months ago (almost 3 now) with no idea of what I wanted to do until it hit me that I should do some sort of dungeon type map.I wanted to base it off of a real dungeon, somewhere in the world, but I couldn't really find anything that worked for me. I did, however, find a D&D map that looked pretty cool and I ended upbasing it off of that. My final map doesn't really have any actual resemblance to the map I based it off because, well, you know - had to add hidden rooms and traps, etc... So the basic form ofthat D&D map is buried in this map but you wouldn't really be able to recognize it without removing all the stuff I added.

I would like to encourage you to play this map 3 times. There is a choice not too far from the beginning where you can go left or right (this is my attempt to make the map non linear).Once you choose, the other option will close off (not permanently). You will (depending on that choice) pick up one of 2 keys that you will need to get to the final sections of the map.So, I would encourage you to play it a 2nd time to choose the opposite root and see how it affects the gameplay, as it ultimately will.

The 3rd playthrough I would encourace with -nomonsters. I put a LOT of time into this map just working on atmosphere and "beautification" enhancements. I have always believed through my more than 2 decades of designing levels that a map should not only look good but that it should look like a real environment. So I put a lot of effort into that with all my maps and this map is no exception. And not only do I want it to look like a real environment but I also want it to look like a Doom environment and this one, I think, accomplishes both of those goals.

Finally, I didn't implement difficulty levels. I feel, at this point, that the game has been out long enough that any decent gamer should be able to play a hard map. If you can't, work on those skillz!!! :-)That's what I did so that I could play modern games on harder difficulties. I kept playing on hard till I got better and since I'm 60 years old (2022), I know if I can do it, anyone can do it.

As mentioned above, you will only have your pistol, a chainsaw and your fists to get through this map. This was definitely a choice I wanted to make. I think the end gameplay result is magnificent. It forces you to be fast and use those skillz and switch to the right weapon for the moment. :-)

All the screenshots you see below are from the Risen3d port but this "should" play in any port. I'm quite certain it won't play in vanilla Doom2. I play tested in Risen3d, Zdoom, Zdoomgl, Chocolate Doom and Skulltag. I didn't have any issues in any of those ports. 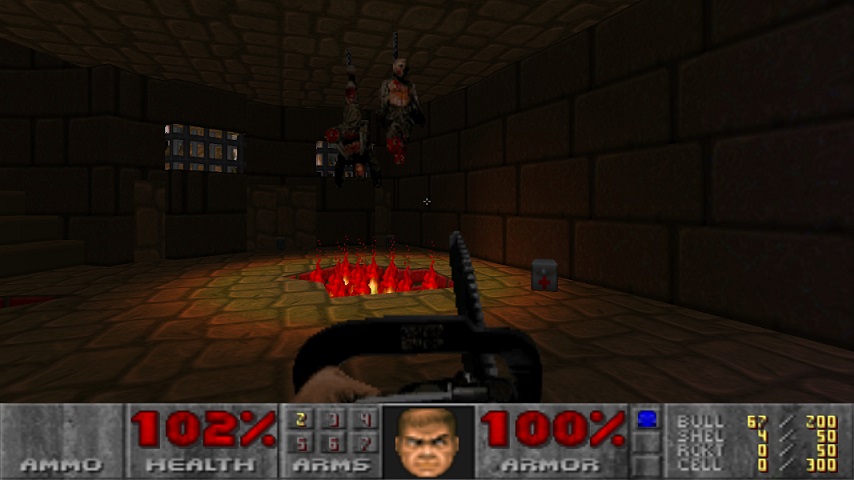