Story: You are in Mitnal, The Mayan realm of the dead. It is the ninth and lowest level of the underworld; a place of eternal cold and darkness. This is where the souls of those who lived a bad life are sent to. The ruler of Mitnal is the god Hunhau, also known as Ah Puch. In Maya mythology, Ah Puch was the King of Mitnal, the underworld, which was the worst of all nine hells. He was depicted as a skeleton or corpse adorned with bells, sometimes the head of an owl; even today, some Central Americans believe that an owl's screeches signify imminent death. YOU have descended to this ninth and lowest level of the underworld where it is your mission to escape the menagerie of demons who would prevent you from escaping.

This is a HARD map. If you don't know how to strafe, you might want to learn. I recommend saving fairly often. I did my best to make it hard but fun and I didn't want to leave the player running around low on ammo and health all the time so I tried to make sure there is plenty of both but not too much. You WILL die, repeatedly. Save your game. You may find that the map itself poses as much of a threat to you as the monsters at times. Yes, I did that on purpose. Have fun and don't give up if you're having trouble finding something. Everything in the map is functional. You won't find an area you can't get out of or anything stupid like that. There is a spot - you'll know it when you see it - there is an upper floor and spinning light structures (2) in the middle of the room. After you hit the switch (you'll see it) it will lower a platform. The floor beyond the platform is supposed to raise and 99% of the time it does but if you are standing in just the right spot as the floor is raising and the platform behind you is moving you can get stuck. I definitely recommend saving before you hit the switch just in case. That's about it. I hope you have as much fun playing it as I had building it. Imagine - 6 months. Jesus. One more thing - I do recommend using Zdoom as it renders the map the best. Have fun!

Mitnal has been downloaded times since I installed this code on Feb 8, 2014

send me an Email

Please feel free to leave comments in the comment box at the bottom of this page!!

The God of Mitnal - Ah Puch, is awaiting your arrival. Don't disappoint him.

Since this is my website, I choose to take this moment to have a short discussion about what you are about to discover in the bowels of this map. I don't know if anyone has ever appreciated the full extent of what i accomplished in this map and as you are winding your way through the four separate sections - each with it's own unique theme and appearance, i want you to take note (after you kill the bad guys of course) of some of the 3d effects that I accomplished and even more than that, the absolute attention to detail to lighting that i placed in this map. note in some of the pictures below - the light being cast by the columns as the baron approaches - a small, yet significant step in creating a truly frightening environment. Then there is the center picture in the top row. notice that i took the images of the demons (those green wall textures) and moved them away from the wall and then shadowed them on the wall behind to give a true 3d rendition in that area of the map. this map is replete with examples, just like this. for instance, take note of the second picture down on the left - same concept as the center one but i placed the wall textures in such a way that only those sections of wall were lit. you will find human remains hanging in mid space and a ton of other features that had never, and to this day (and to my knowledge) have ever been duplicated in a doom 2 map. in the final picture below and in a couple of the ones previous, i created cages, suspended in mid-air, with imps chucking fireballs at you (and no, that is not the only danger lurking in that section of the map). there are suspended platforms in that same area which challenge you to cross the void without falling in and dying and finally a door - open - suspended in mid-air, at the end of the journey across that deadly void. so keep an eye out on the lighting - i worked on one area where there was a platform that i managed to create shadows of the upper and lower sections while leaving the open center section completely lit. no easy task, i assure you. so what I'm trying to say is this - i think of my final few maps - bloodworks, The hub, and this one, this is the map that i am most proud of in terms of what i managed to accomplish with 3d and lighting effects. bloodworks was the map that i trained on -the one i cut my teeth on, if you will - the one that i made with a difficulty level that would challenge even the most experienced doom player and the one that has the best game play i've ever created. but this map is the one that i really challenged myself to put the engine to the test and the result was (in my less than humble opinion) amazing. so enjoy. it's not as difficult, game play wise as bloodworks, but it is the best example i know of, of how to put 3d effects and dazzling lighting effects to use in a doom 2 map. finally, if you don't have it - get risen3d. it renders these maps absolutely beautifully, and you will thank yourself for getting it and using it! thanks for reading and enjoy the map!

For a look at a Brutal Doom playthrough of the map - click here. 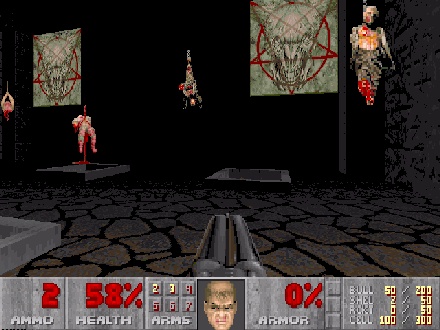 What can I say about Bob, my mentor and long distance friend? What do I say about the one who has taught me some seriously awesome editing tricks, the one who has inspired me into mapping in the first place? He is one sick-assed puppy, damnit and rightfully spoken, if I may say so myself! Mitnal lives up to its dark name, and the action is hairy and taut. This one is NOT for the novice, seasoned Doomers only! SAVE OFTEN and prepare to die a HELLUVA LOTY!

From the first chamber to the end-level, Mitnal is a bloodbath (using YOUR blood)! There’s ammo aplenty and more than enough baddies to make you create new cuss words. I have roused my wife from sleep EARLY in the morning because I died a horrible death in this map. You will die---REPEATEDLY---, you will get pissed, you will sweat, and you will be eatin’ up save slots with your progress. This is re-playable simply because of the action. No matter how many times you play this one thru, you’re going to bite the Big One!

This is Bob Larkin at his best. It took him months (I know this from the huge number of alpha levels he e-mailed me to play test for him) to complete this project and his hard work and sense of intricate detail is flawlessly evident. His knowledge of creating 3d bridges and cages, even walls, is unsurpassed. There weren’t a whole lot of enemies here, but he placed them in all the right spots for optimum pain dispensing. There was even a door where if you stood on it the wrong way, you would be trapped and at the mercy of whatever happened to see you there. That door was the brunt of my many colorful colloquialisms, as I played thru. Mitnal was actually supposed to be the fourth level of Bob’s “Descent Into Hell” project, but he opted not to include it. If this is any preview of what “Descent” is going to be like, HOLY SHIT, MAN! Take a bow, Bob. You’ve earned a nice long rest. You’ve outdone yourself.

Get this wad, download it, and set aside some time with a beer and a shot of Jack. Boy, are you in for it…

who, btw, I wish had remained in the doom community. he would have been a brilliant reviwer!

Visuals [9/10] There are plenty of cool things to keep your attention. Bob Larkin is the only Doom mapper who consistently incorporates 3D effects into his maps. You'll be pleased to know that he had a bonanza here. It's always nice to revisit the same areas of the map from a different perspective; here you'll clang along walkways which overshoot rooms littered with the corpses of monsters you were down there fighting just a minute ago. The lighting is very attractive in certain areas, notably the dark rooms where Spectres lurk. Seeing monsters coming at you through strips of shadow and light is dramatic to say the least. The computer station area which you will discover in the last quarter of the map has become corrupted, with computer screens alternately displaying arcane symbols and simple threats like "Die!" There is something disturbing about the thought of an emotionless utility - which is such an intimate part of our everyday lives - suddenly turning against us in this way.

Read the rest of the review here!